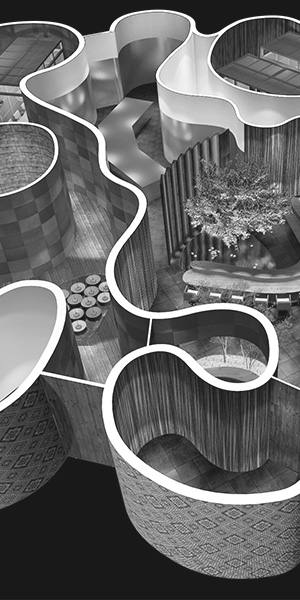 CATEGORY
RESTAURANT
YEAR
2015.06
AREA
Azerbaijan
OUTLINE
Japanese restaurant in Azerbaijan. For a restaurant serving Japanese food in a land so far away from Japan, the materials and structure of the space are used to evoke a sense of Japan.

This project was for a Japanese restaurant in Azerbaijan, a country in between Russia, Eastern Europe and the Middle East.
Although Azerbaijan may not be a country familiar to most Japanese people, we decided to incorporate as much Japanese culture as possible into the design for this restaurant owned by Azerbaijani Japanophile. 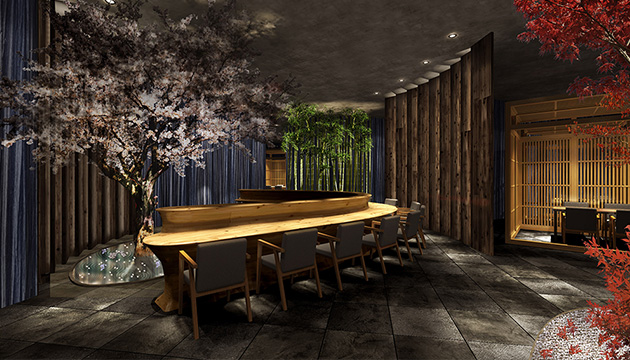 The etymology of Azerbaijan lies in fire. The name of the capital city, Baku, means “pounded by winds”. This imagery was chosen as the motif for the design.
The walls, which seem to trail the wind, are inspired by the “Oshima tsumugi” silk fabric from Amami Oshima used in kimonos.
The rooms surrounded by these winding walls create a distinct atmosphere by using such materials as Japanese “washi” paper, bamboo and burnt cedar.
These materials create the elegance that one would expect from a high-class Japanese restaurant in a foreign land.
Additionally, the ability to see the other side of the restaurant from the rooms gives a sense of “depth” which is also a very Japanese aesthetic.
The boomerang shaped counter is surrounded by sakura cherry trees and each of the rooms features Japanese-made “nijo kekkai” units which are used in the tea ceremony to symbolically indicate the separation between the guest and the host.
Visitors to the restaurant will feel as if they are taking a stroll down a traditional Japanese street or in a Japanese garden. In Japan, there’s a belief that the utensils used should be chosen to add to the dining experience. In this case, the space itself acts as a large utensil contributing to a distinctly Japanese experience for customers.
text by salta